Sulfur dioxide is used in winemaking for its antioxidant and antiseptic actions. The maximum quantities allowed in winemaking are established by specific laws in force in each country. In the European Union, the maximum allowed limits are 160 mg/l for red wines and 210 mg/l for white and rosé wines. There are exceptions that allow member states to raise this value by a maximum of 40 mg/l in unfavourable years. Sulfur dioxide is used from the earliest stages of wine production, from must, right up to bottling.

Sulfur dioxide is mainly used in the following cases:

In order to correctly use SO2 in the microbiological stabilisation of wine, the following must be known:

Ask for a quote

Sulfur dioxide can be used in wine production in different forms: depending on the annual consumption, the preparation of the winemaking staff and the time of use of the sulfur dioxide, one form may be preferred over another; we will analyse the most commonly used forms below. 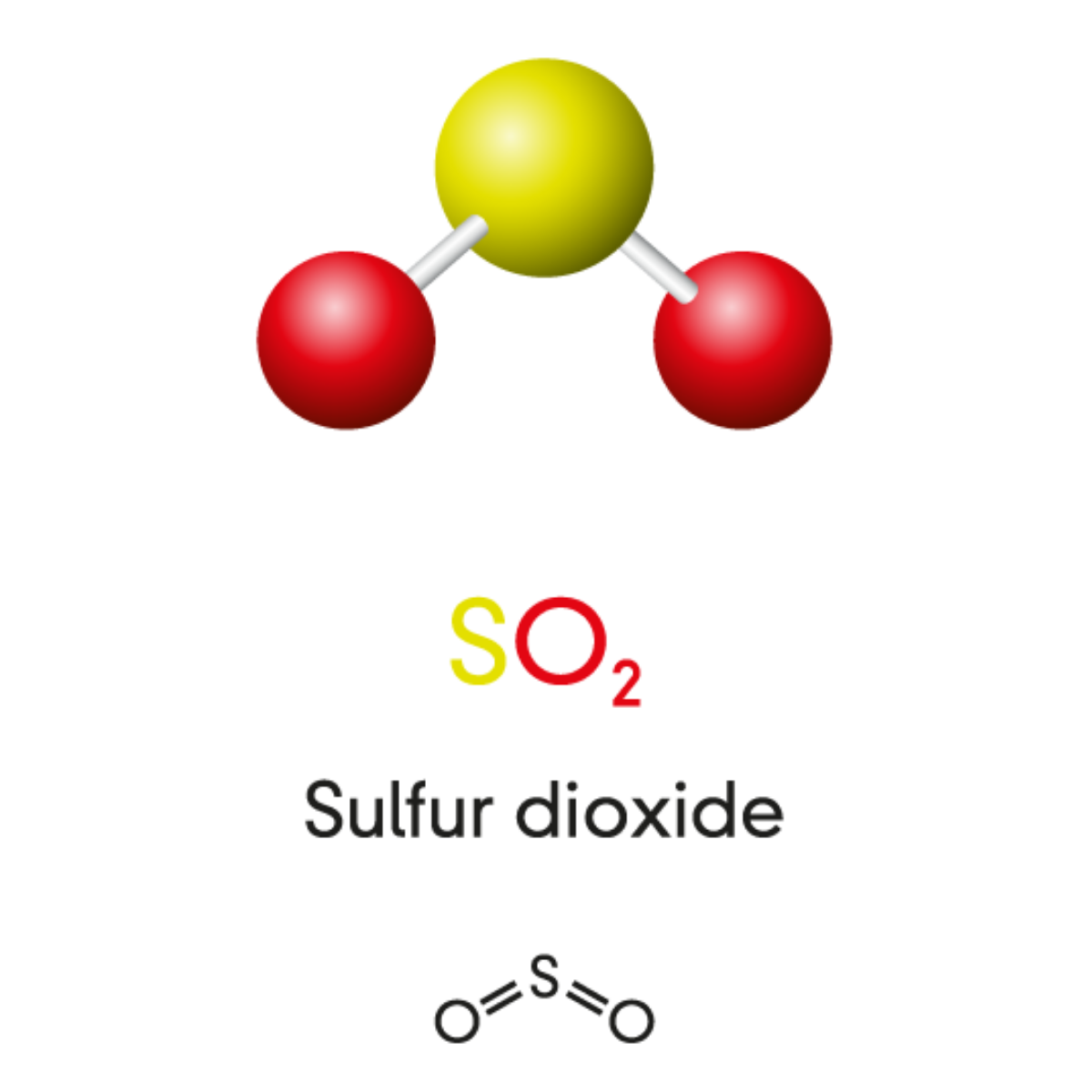 This is the name for gaseous sulfur dioxide stored in cylinders at a pressure of –3 atmospheres and which, therefore, is in a liquid physical state at room temperature. It can be introduced into the wine directly through a tube immersed at least halfway down into the tank to be treated.

The benefits of using liquid sulfur dioxide are:

– it is a pure product that does not undergo alterations;

– the yield of sulfur dioxide is double that of potassium metabisulphite;

– it does not add other substances to the wine and does not increase residues;

– it costs less than the other sulfating forms.

On the other hand, the disadvantages are:

The optimal solution, if a cylinder cannot be used

The product is sold in plastic jugs containing 20 kg.

Antiseptic action: it inhibits the growth of microbial flora. The antiseptic efficacy of a given dose of sulfur is increased if the starting microbial population is reduced, for example, by filtration. During the conservation of the wines, sulfur dioxide inhibits the growth of all micro-organisms, preventing cloudiness due to the presence of yeasts or the re-fermentation of sweet wines. The antiseptic action affects both yeasts and bacteria; however, bacteria are sensitive to lower doses than yeasts and, therefore, an alcoholic fermentation can occasionally take place while a malolactic fermentation cannot. The tolerance of yeasts to sulfur is greater in must than in wine, because the must has a high concentration of alcohol, which also acts as an antiseptic. The selective action carried out by sulfur dioxide on the natural yeast strains present in the must is also important. Every type of yeast has its own specific characteristics and behaves differently during fermentation. Sulfur dioxide also helps ensure a better and more homogeneous fermentation. Some yeasts and many bacteria are particularly sensitive to the effects of sulfur dioxide, which will therefore carry out an appropriate selecting action.

Antioxidant action: the antioxidant effect, in reactions of a chemical nature, is exploited throughout the duration of the process, both during vinification and in storage. In particular, SO2 protects wines from the excessive oxidation of phenolic compounds and some aromatic substances, colouring substances, tannins, alcohol and iron. The risks of oxidation during wine production are quite high: from the moment in which the grape bunches are collected from the vine and transported to the cellar, the danger of oxidation occurring is always present. Furthermore, every time operations are carried out on the wine, the possibility of contact with oxygen is always very high, a risk that increases even more if the must or wine is rich in enzymes and moulds – such as Botrytis Cinerea – and metal catalysts, such as iron and copper. For these reasons, the use of sulfur dioxide can limit the effects of oxidation, thus ensuring better quality and conservation of the wine. SO2 also provides an antioxidase action: it protects musts and wines from enzymatic oxidation, instantly inhibiting the oxidase enzymes (tyrosinase, laccase) and, if necessary, allowing their subsequent destruction.

Solubilising action: sulfur dioxide has a solvent effect, favouring the extraction of certain substances present in the grape skins. During the maceration of red grape skins in the must, sulfur dioxide helps put the colouring substances and tannins into solution. For this reason it is always preferable to avoid sulfating white grapes, as this would lead to yellowing of the must and enrichment of the tannins. In white grape musts, the addition of sulfur dioxide is always carried out after the separation of the solid parts, that is, after draining. Among other solvent effects, sulfur dioxide encourages the extraction of minerals and acids.

Action on the organoleptic properties: sulfur dioxide also has a positive effect on the taste and aromas of wine. In organoleptic terms, it prevents the oxidation of aromas, in particular the fruity aromas typical of young wines, eliminates the so-called “stale taste”, and attenuates rotten and mouldy flavours. To achieve these positive effects, sulfur dioxide must be added when the alcoholic fermentation is completely finished. If it is added too soon, before fermentation has ended, i.e. when the temperature of the wine is still too high, unpleasant aromas and flavours can develop (sulfur dioxide, mercaptan and rotten eggs). Finally, sulfur dioxide has a mild clarifying action, as it favours the curdling of colloidal substances present in wine and in the must, thus favouring the spontaneous precipitation of the lees. Sulfur dioxide, added in large quantities to the must, is used to obtain the so-called “preserved must”, that is, non-fermentable, as it blocks the activity of the yeast.